Are you ready for a cedar shutter shocker?  Okay, how about just part of one?  You see, I began to write the full reveal (update: see full reveal here)and DIY Exterior Cedar Shutter reveal including the before, during, and after, but it got to be very long and I almost fell asleep 😯 .  So, today it’s just going to be a “sneak peek” at our gorgeous DIY exterior update using “Exterior Cedar Shutters”.  The full reveal of the entire home with new shutters will be this Friday.

Okay, so let’s take a look at these shocking shutters, shall we?  This is the side of our home facing the East that is really the main entrance area.  This side gets lots of action, and it’s actually the view that is seen the most as you drive up to our house.  You may remember when we added the Garage Doors last Spring?  The doors look great, but look at that drab window above them.  It gets a lot of sun, snow, etc. so the paint is chipping off and it just looks old.  And boring. 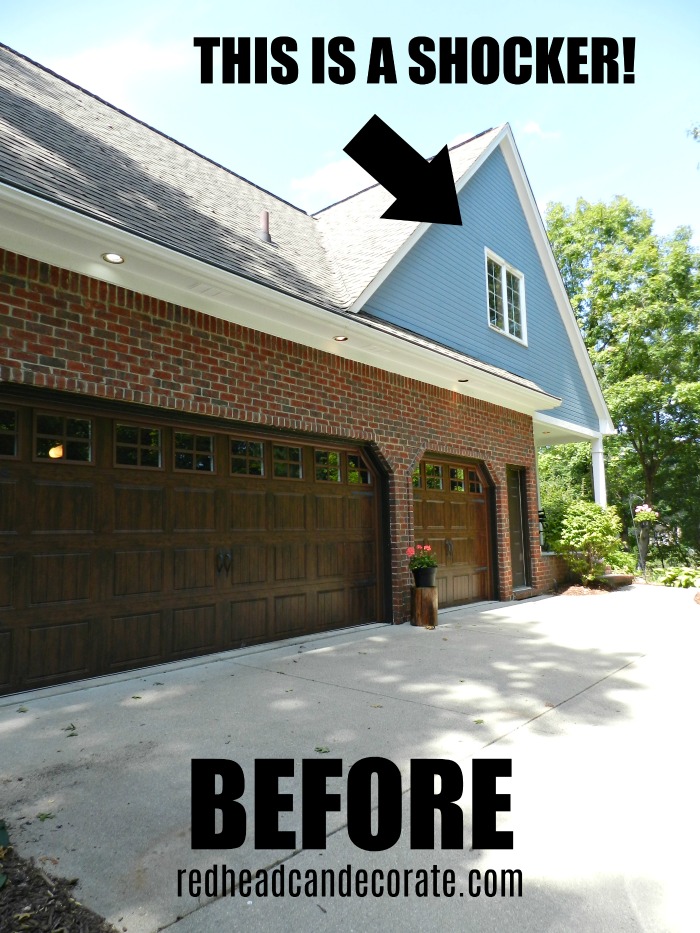 So, while we were in the middle of putting up all of our new shutters, I was getting in my car to  get the kids from school and I realized that this window would actually look fantastic with shutters, too.  I mean why not, right?  Have you ever thought about why you don’t see shutters on the sides or rear of a house?  In fact, when people do put them there, it sometimes looks odd, doesn’t it?  I really don’t know why that is, but because of the angle of our house I knew it would really look cute complimenting the garage doors.  At least I hoped.

Before I show you the after photos, I have to tell you that we did not build the cedar shutters ourselves.  We actually ordered them on line (see below) and they were delivered to our front door in a couple weeks.  There was just no way I wanted to build shutters for our entire home.  I just didn’t.

However…I was willing to stain them and seal them so they would match the rest of our house. 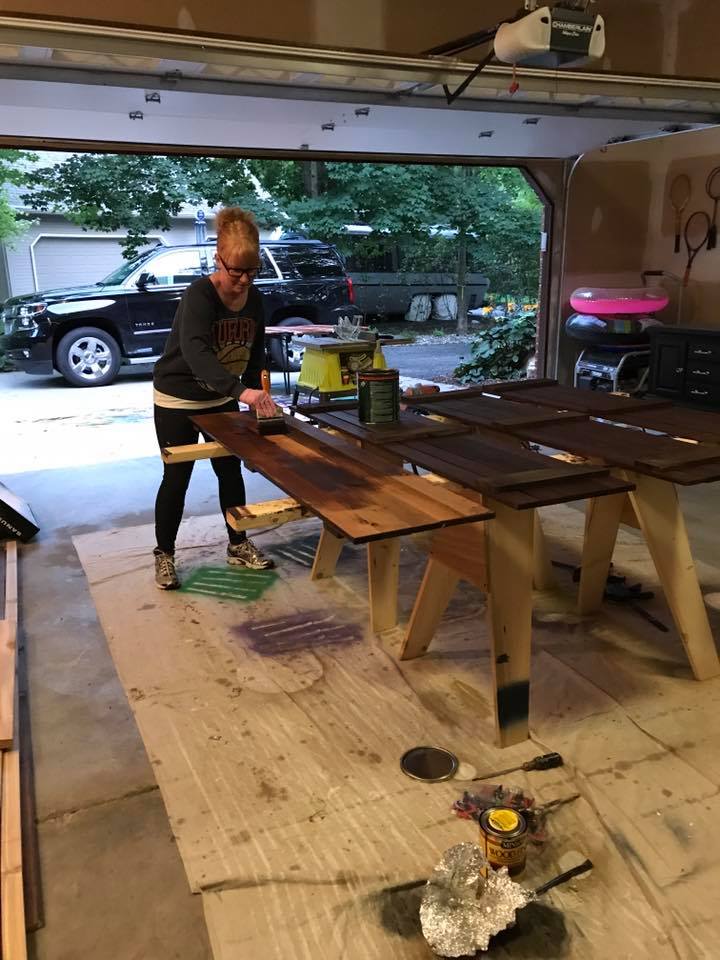 Let me warn you that even staining/sealing them is still a ton of work.  It also requires a great deal of patience because of the drying time.  Most of the supplies that I used are at the bottom of this post in my Amazon ad, but you can also stop back this weekend for the full supply list including the color stain, and the exterior polyurethane I used. 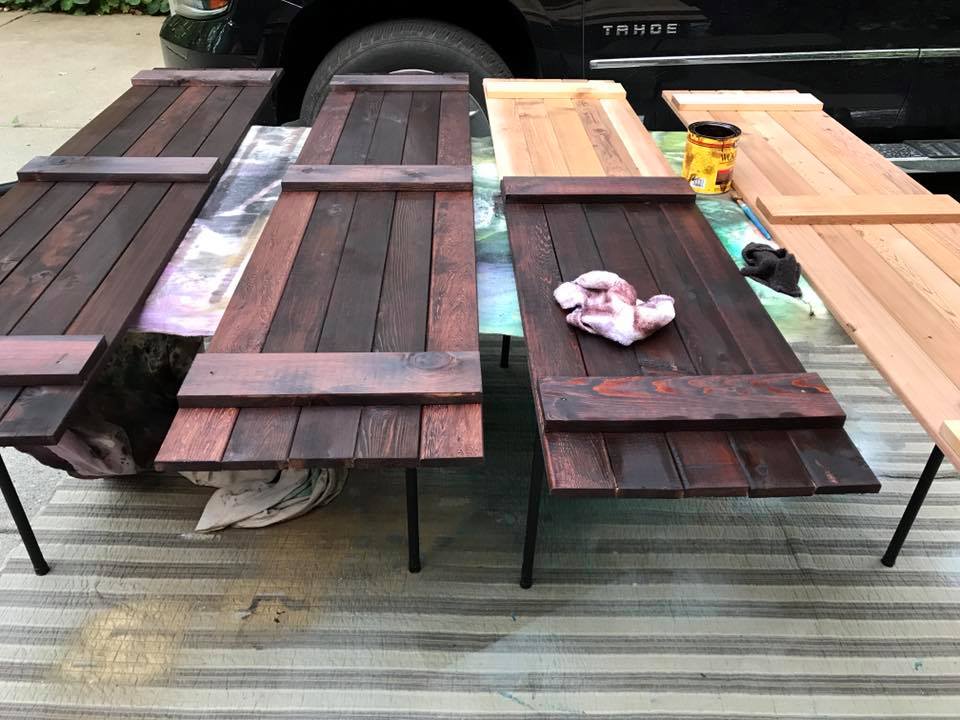 After all of the shutters were stained, and sealed, we had to remove the old ones.  Take a look at how bad these things were up-close. 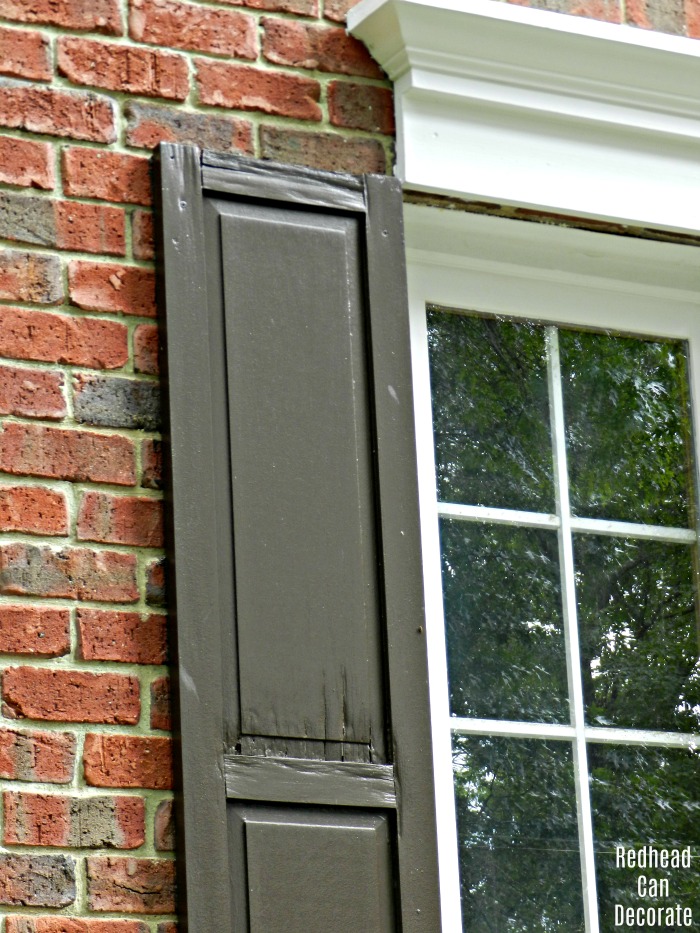 I though removing these battered beasts would be as easy as simply unscrewing them.  Girl, I was so wrong.  Removing them was almost the hardest part (the hardest part is still yet to come on Friday).  These original shutters have been on the house since 1994, so the screw was very tight, and you could not get it loose.  My husband ended up having to use a crow bar to pry these suckers off the house.  We were able to save 2 shutters for me to repurpose this Christmas, but all of the others were basically in shambles. 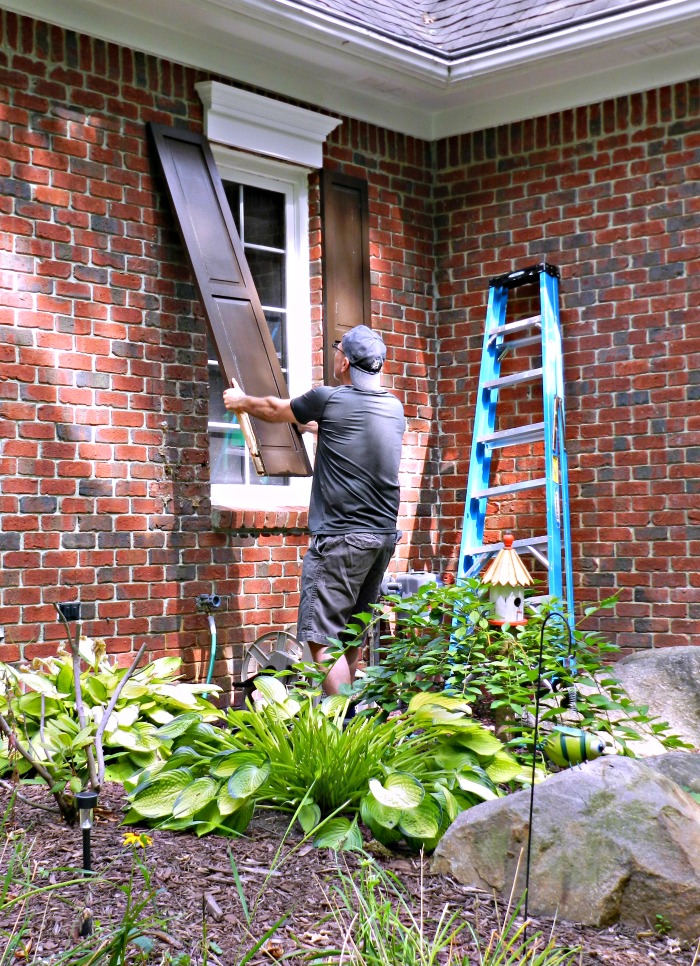 So, enough of this small talk.  Let’s get to it, Julie.  Here’s the before and take note of the paint chipping off the white trim. 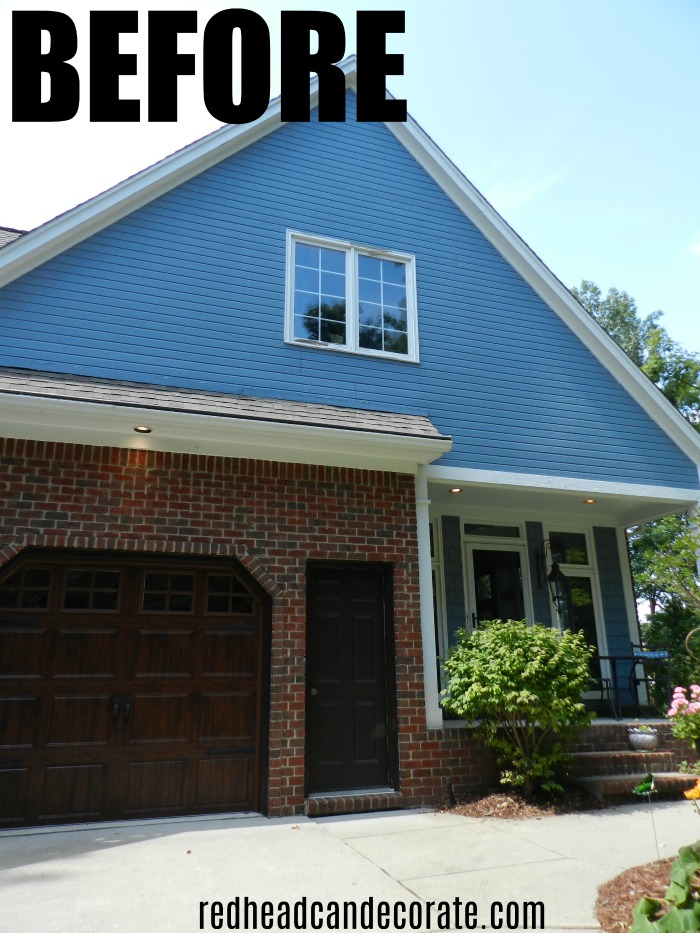 And now…the beautiful after. 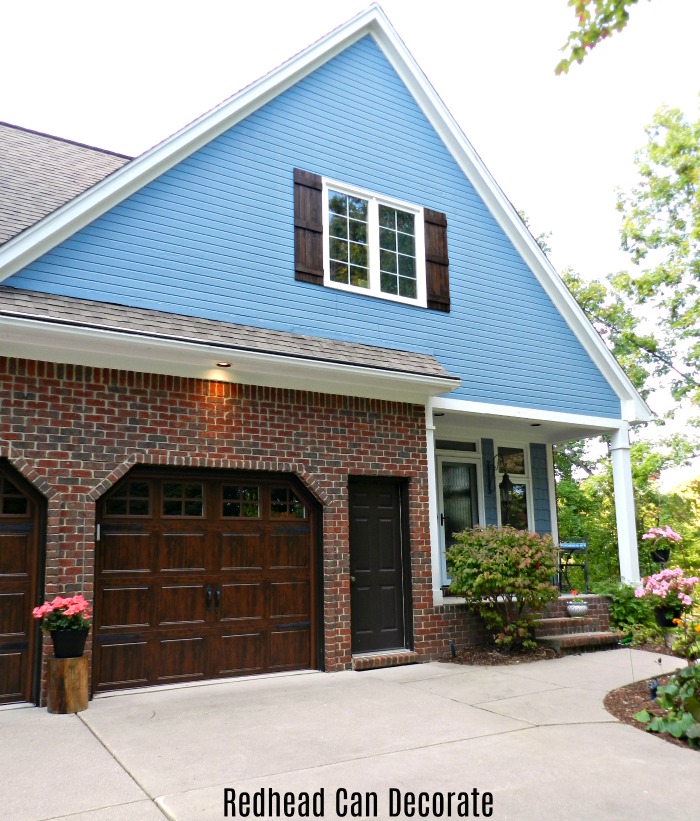 EEK!  Don’t they make a huge difference?  Now, why didn’t I think of this before?  I am so looking forward to next Spring because I have big plans for that window (see hint here).

My amazing husband (who use to be a painter before he was a lawyer) got up there while I held the ladder and first scraped off all of the old paint, and repainted the trim.  Then he attached the shutters (see tutorial this Friday).  I really didn’t enjoy him being up so high, but honesty he was a very experienced exterior painter back in the day.  Still, we are never doing that again.  I do recommend you hire someone professional to do your high windows for you.

Look how nicely the shutters compliment the garage doors, now.  It makes me feel like I live in a cottage 😀 .  I think I might name the house “Cedar Oak Cottage”,what do you think? 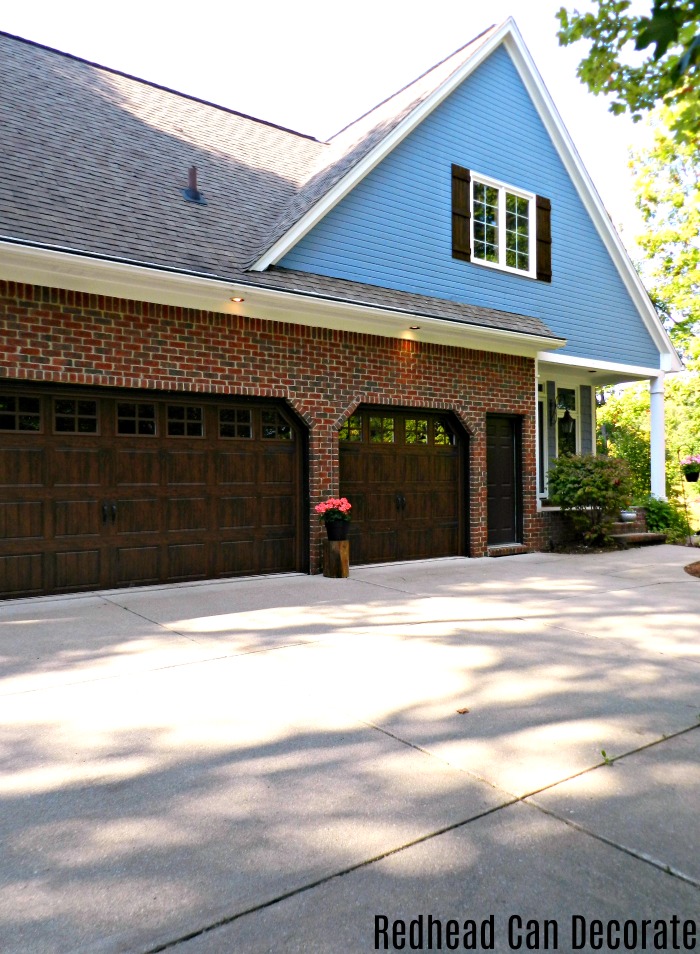 I am shutterly utterly so excited to share the front of the house full reveal with you.